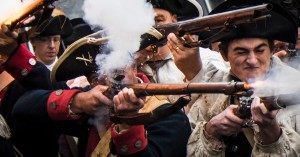 In order to fulfill their agenda of societal change, liberals, statists and Marxists resort to logic that escapes those of us with lesser minds. They lock onto odd, carefully selected statistics that distort the truth and seek to make their obviously false purposes seem reasonable.  Note that the information included herein is indeed accurate, as per leading firearms experts and general firearms knowledge.

One of the pro-gun control arguments put forth is that the Framers of the US Constitution could not conceive of weapons as deadly as the modern AR-15 semi-automatic civilian rifle, mistakenly referred to as an “assault rifle”. They assure us that, had our primitive Founding Fathers had any idea that weapons technology would advance, they would not have left the 2nd Amendment so openly worded.

With that rhetoric in mind, I offer the following completely factual information:

Is the Flintlock deadlier than AR-15?

Fact! The flintlock rifle in common usage when the Framers ratified the 2nd Amendment of the US Constitution is twice as deadly per capita as the modern AR-15 “assault rifle”. The official population of the United States in 2016 is 324,118,787 persons. Assuming the rifleman could arrange the population of the US to stand in a convenient arrangement so that he could continuously shoot 80 persons per minute it would take 67,524.75 hours of continuous shooting to eliminate the entire population of his contemporary community. This gives a per capita death rate for the AR-15 of .00148% in 2016.

The official population of the United States in 1790 was 3,929,214 persons. Assuming our flintlock armed rifleman arranges his countrymen to stand patiently in a similar arrangement while he murders them, it would take a mere 32,743.45 hours to kill them all. This gives a per capita death rate for the Flintlock Rifle of .00305%, more than double that of the AR-15!

As is common in today’s mass shootings, the shooters’ lack of knowledge or experience with their weapons has resulted in fairly low effective deaths, such as when the Colorado theatre shooter’s complicated AR drum magazine jammed after a few shots and he reverted to his backup pistol.

In contrast, an 18th century rifleman was anticipated to be an expert with his weapon, using it daily for hunting food as well as being prepared for defense. The Framers therefore ratified the 2nd Amendment expecting these deadly weapons to be in the hands of well trained, highly experienced marksmen, not casual once-a-year hunters.

The inescapable conclusion is that, contrary to what liberals claim, our Founders were comfortable with enshrining weapons in our Second Amendment that were more than twice as deadly as our modern civilian weapons.

Clearly the assumptions are biased in favor of the AR-15, which makes it more embarrassing that the Flintlock proves the far more deadly killer per capita. Note also that the AR-15 fires a .22 inch bullet, compared to the .45 of the Kentucky Rifle, or the .50 of the Brown Bess Musket! Far from being a “high – powered” rifle, the AR-15 is by design a low power, small caliber, low recoil weapon to support rapid shots against medium targets. In some States, the AR-15 is considered to low powered to hunt deer.

20+ years experience in full-time ministry as a pastor & missionary. Intermingled with my ministry experience is work in the professional world as a project visionary specializing in team building. I’m currently working on my doctorate, and have degrees in theology and cross-cultural communications.
View all posts by R. Steven Johnson →
How to Mislead When Telling Facts
The Lesser Spokesman